Benjamin Fowler was born in 1862 in Cherokee County Georgia.  He was the son of B. Elbert Fowler and Malinda Susannah Newbury.  He was a direct descendant of Henry Ellis Fowler of Union County South Carolina.

Through the use of the wonderful research tool of yDNA testing, the Henry Ellis Fowler family of Union County South Carolina has been proven to be of the yDNA Haplogroup I-Lineage IV.

This article is not about him.

The Benjamin Franklin Fowler whom this article is about has been somewhat of a research mystery.  Until now.

I shall go back a generation or two for a better understanding of this family…..

Jacob Lewis (1772-1857) was born in Guilford, North Carolina and moved with his parents to the Pendleton District in South Carolina.  After the death of his father, he and his family moved to Pickens County South Carolina.  He married Ailsie Leonard (1771-1857) and together they raised a large family.

Abner Lewis was born in Randolph County North Carolina, lived in Pickens County, South  Carolina in 1830 and 1840, before moving to Sonoraville, Gordon County, Georgia prior to 1850.  He died in Gordon County in 1889.

Abner Lewis and Mary Breazeale Gibson had a daughter named Francis Lewis born 1823.  Francis was born in Pickens County, South Carolina, and married William B. Barton there in 1841.  Their marriage announcement was printed in the Pendleton Messenger.

It must be said here that the Barton family of Pickens County, South Carolina and their related lines from North Carolina have been very well researched, and this research has been backed up with an extraordinary amount of yDNA testing.  The yDNA Haplogroup for this Barton family is R1b.

I’ve not yet delved deeply into finding the parents of William Barton, nor do I know what happened to him after his marriage to Francis Lewis.  I do know that Francis Lewis (age 27) and her son Benjamin Barton (age 5) were living in the household with her parents, Abner and Mary Lewis, and her siblings in 1850 in the 12th Division of Gordon County, Georgia.  I do not know where William Barton was in 1850; he was missing and I presume dead.

Francis Lewis Barton married Jeremiah “Jere” Dempsey before 1860.  It was not the first marriage for either; Jeremiah Dempsey had been married to Julia A. McCall and their family included two sons and four daughters.

Recorded as Ben F. Barton in the 1870, census, Benjamin Franklin Barton lived in the household with his mother, Francis Lewis Barton Dempsey, his stepfather Jeremiah Dempsey, and his three half siblings.  James Lewis, the younger brother of Francis, also lived in the home in Gordon County, Georgia.

Benjamin F. Barton lived in the household of his stepfather Jeremiah Dempsey and his mother Francis in Sonoraville, Gordon County, Georgia in 1880.

Jeremiah Dempsey died October 13, 1881 and was laid to rest at the Bethlehem Baptist Church cemetery in Sonoraville, Georgia.

Abner Lewis and his wife Mary Breazeale Gibson, parents of Francis, were also buried at Bethlehem.  Their son Joab Lewis (1825-1910) and his wife Phalba L. Barton (1829-1900) were buried there as well.

I must divert for a moment to Joab Lewis, brother of Francis.  His wife Phalba L. Barton was the daughter of Bailey Anderson Barton (1795-1847) who was the son of Benjamin Franklin Barton (1760-1818) and wife Dorcas Anderson (1773-1849).  These were Pickens County, South Carolina Bartons and William B. Barton, first husband of Francis, was no doubt  very closely connected.

Exit Benjamin Franklin Barton.  There are simply no records to be found of him after the 1880 census.  It is possible that he died in the decades between 1880 to 1900 and that he lies in an unmarked grave in the Bethlehem cemetery.  But I don’t think so!  What has been written up to now is documented fact.

The following sentence is speculation based on circumstantial evidence and the solid foundation of yDNA testing:

The marriage certificate of B.F. Fowler and Sarah Nix is below: 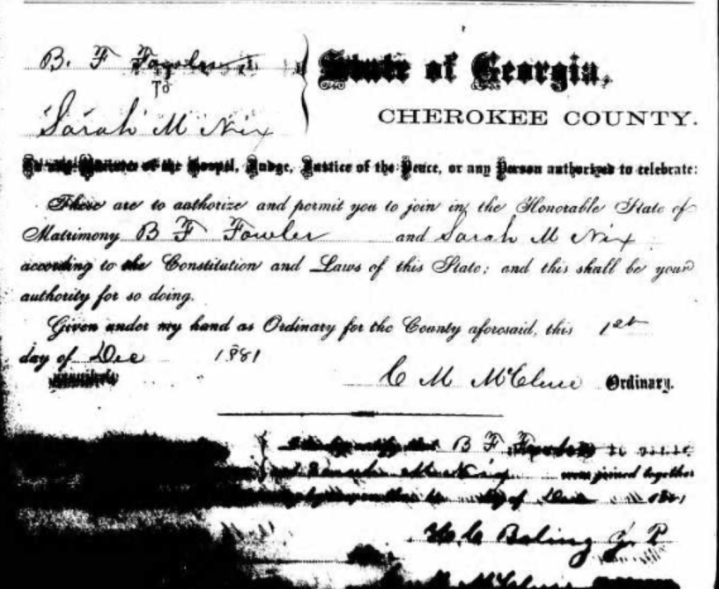 Upon closer examination, it appears that the name “Fowler” has been altered, perhaps a name was erased and written again.  Why?  Was the name first written as “Barton” then rewritten as “Fowler”?

I am currently in the process of searching for reasons that Benjamin Franklin Barton may have changed his name to Benjamin Franklin Fowler.  I can certainly think of many reasons, but I need to know if and why he did this.

It is known that Benjamin Franklin Fowler and Sarah Nix moved their family from Georgia to Tennessee between the years 1893 to 1900.

In 1900, Ben F. Fowler lived in Civil District 10, Loudon County, Tennessee with his wife Sarah and their six children.  They had been married for 19 years, and Sarah had given birth nine times during the marriage.  Three of these children did not survive until 1900 and their names are unknown to me.

Benjamin Franklin Fowler died after the 1900 census was taken and before Sarah Fowler was listed in the 1908 Knoxville, Tennessee city directory as the widow of Frank Fowler.  In the 1910 census, Sarah was listed as a widow  in the household of her daughter Martha Christine Fowler Hickman and her son-in-law, James Hickman.  It was a most extended family, illustrated and explained below.

Apparently, both James Hickman and Martha Christine Fowler had been married before as the census indicates this was a second marriage for them.  Ethel M. Fowler and William Fowler were listed as stepchildren to James Hickman.   Martha Christine was their mother.  Who was their father?  Sarah Nix Fowler lived in the home, and Ray Hickman, brother to James was in the household too.  Charles Fowler and Carrie Fowler, the youngest children of Sarah Nix Fowler, were also in the household.

Carrie Fowler had married William Dewey Smith before 1920, and Sarah Nix Fowler had moved in with them prior to the 1920 census.

Sarah Nix Fowler remained in the household in 1930 with her daughter Carrie Fowler Smith and her son-in-law Dewey Smith, although the household had moved from Knoxville, Tennessee to Simpsonville, South Carolina.

Carrie Fowler Smith and Dewey Smith’s family had grown considerably, and the elderly Sarah Nix Fowler continued to live with them in 1940.

The following documents offer proof of the family of Benjamin Franklin Fowler and Sarah Nix Fowler.  Note that he was almost always referred to as “Franklin” Fowler.  Sarah Nix Fowler died in 1846 in Simpsonville, SC.  The first document is her Certificate of Death; the remaining ones are Certificates of Death for two of her children, Martha Christine Fowler Hickman and Charles A. Fowler, and a Delayed Certificate of Birth for her son Oscar Franklin Fowler.

In the 1850 Cherokee County, Georgia Census, there are Nix, Barton, and  Fowler families who came from South Carolina.  I’ve not had time to analyze them, but I know in my heart that they are interconnected in many ways…

I have briefly analyzed the census taken in 1880, the year before B. F. Fowler married Sarah Nix.  Of course, I am looking for a logical explanation as to why a man would require a new surname.  I thought perhaps proximity to a Fowler family would offer a clue……

The BLUE arrow is the family of Augustus Fowler (1846-1926).  Augustus was the son of William Benjamin Fowler (1824-1909).  Descendants of this Fowler line have yDNA tested and the Haplogroup does not match the Barton line or the Henry Ellis Fowler line.  Was there a connection between this Fowler family and the Barton or Nix families or only coincidence that the Fowler and Nix families were neighbors?

The RED arrow indicates the family of Christiana Peterson Nix, widow of Charles Nix.  The household includes her three children, Sarah M. Nix being the youngest at eighteen.

There is no proof in the above three paragraphs that Benjamin Franklin Barton changed his name to Benjamin Franklin Fowler prior to his marriage to Sarah Nix in 1881; nor is there any logical reason that I can find, although I have to admit that I have not yet spent the time necessary to dig deeply.

We do have circumstantial evidence: Benjamin Franklin Barton is well documented from his birth in 1844 up until the 1880 census.  He disappears — and Benjamin Franklin Fowler appears a year later and is documented until around the time of his death in the very early 1900s.  Is that enough?  Absolutely not.

Circumstantial evidence relies on inference, and sometimes that’s all we get.  But fortunately for the researchers out there interested in this Fowler family line — we have more — we have yDNA and DNA is truth.

A direct Fowler male from this line has yDNA tested and the yDNA Haplogroup is R1b- Lineage II.  This lineage is referred to as the Fowler-Barton Lineage.

Yes, Benjamin Franklin Fowler is a direct descendant of the Barton family.  It seems very likely that he was born Benjamin Franklin Barton, and for reasons unknown to me at this moment, changed his surname to Fowler.

Benjamin Frankin Fowler is the Founder of a new line of Fowlers.  He was a true Patriarch!